Talented People Who Dismiss Their Strengths

Talented People Who Dismiss Their Strengths

We found this fabulous Harvard Business Review article showing how Michelle McKenna-Doyle, CIO of the NFL, uses Strengths to unleash the power of her employees.

Effective leaders recognize talent, and occasionally have to convince their team members that their Strengths are noticed, valued, and welcome.

The author suggests some go-to questions to uncover Strengths in others. For instance, you might ask, “What compliments do you dismiss? When we’re inherently good at something, we tend to downplay it. “Oh, it was nothing,” we say — and maybe it was nothing to us. But it meant something to another person, which is why they’re thanking you. Notice these moments: They can point to strengths that you underrate in yourself but are valuable to others.”

At our workshops we see “ah-ha moments” occur when participants see that they offer something that no one else can. They return to work knowing that their uniqueness is valued, and everyone has a part to play in the team’s success.

We care about your success.

Why Talented People Don’t Use Their Strengths

If you’ve watched the Super Bowl in recent years, you’ve probably seen the coaches talking to each other over headsets during the game. What you didn’t know is that during the 2016 season, the NFL made major league-wide improvements to its radio frequency technology, both to prevent interference from media using the same frequency and to prevent tampering. This was a development led by John Cave, VP of football technology at the National Football League. It’s been incredibly helpful to the coaches. But it might never have been built, or at least Cave wouldn’t have built it, had it not been for his boss, Michelle McKenna-Doyle, CIO of the NFL. 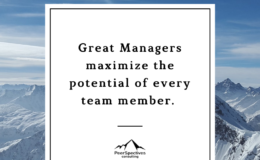 How Influential is a Good Manager?

Have you found your ikigai? Your reason for being?

Encouraging persistence: the benefits of the uni-community

Let Us Help You Implement the Next Steps of your Career!

We are excited to announce the launch of our new book for young people!